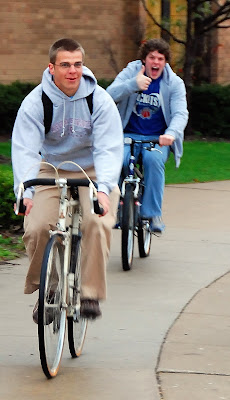 The stack of news clips in the corner can only mean one thing: Post this news now so I can start the week with a clean desk!

First up, someone wrote to The Plain Dealer to ask "Whatever happened to a bill that would make children in Ohio wear helmets while riding their bikes?" The answer, from today's edition:

"The law proposed last year by State Rep. Michael Skindell, a Lakewood Democrat, has not gone to vote. But Skindell is trying to build support for it. If passed, it would require children under 18 to wear a helmet when riding a bicycle. Police would first give warnings but would cite repeat offenders, whose parents would have to pay a $25 fine. The measure was introduced by a Dayton-area state senator, but Skindell introduced it in the House. He considers it an important matter of child safety that could prevent head injuries. An avid cyclist, Skindell pushed the bill after having a bad accident himself a little more than a year ago. Skindell said that while riding on Lake Avenue in Cleveland near West 117th Street, he was cut off by a car and his bicycle hit it. He said he struck his head on the car roof and again on the pavement and would have been killed if he had not been wearing a helmet. He said he is still recovering from a fractured collarbone and has just started riding again, on safe trails. Skindell said the bill has the support of pediatric groups and an association of Ohio children's hospitals, including Rainbow Babies & Children's in Cleveland. The bill had a hearing in the spring. Skindell said he hopes the bill will pass next year."

On a related note, when we sent photos of Bike To School Month (like the one above) to sponsor Giant Bicycle in California, the west coast folks were shocked to see all the Bay High School students without helmets, which have long been required by law for anyone under 18 in California.
In other news....

Thanks to Krista and Christine for the tips!
Posted by Tracey at 7:38 AM