Bikes in the news: Electra love from California 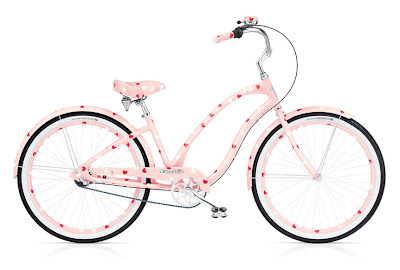 And then there was one. We were contacted this week by Jan, a Califorinia woman who had her heart set on buying an Electra Pink Sweetheart Pajama Party cruiser bike. When her local bike dealer and the west coast Electra rep told her they were out of stock and it was discontinued, Jan's love for the bike stubbornly persisted, inspiring a search on the Internet that led her to the Century Cycles website. Turns out, we are in possession of possibly the last two Pink Sweethearts in the U.S. Now one is boxed up and on its way to Jan, which leaves just one Pink Sweetheart in Rocky River, awaiting the embrace of an owner as passionate as Jan. She thanked us for our cross-country help and excellent website, but we send our appreciation right back at her -- Jan is another customer who personifies our slogan, "Define your life. Ride a bike."

In other news this week:

Moving Targets: In the shift to pedal power, bikers and drivers fight over their patch of asphalt. ("A little civility would be nice, especially from the person driving the 3,000-pound car.") -- The New York Times

Bike Aboard in the Cuyahoga Valley National Park -- and the effort to make the national parks less auto-dependent in general -- are highlighted in this PD article. FYI: Century Cycles in Peninsula sells the $2 Bike Aboard tickets, and be sure to save your ticket after you ride the train -- there are money-saving Century Cycles coupons on the back of each one! -- The Plain Dealer

As you're cheering for Team USA, this 49-year-old cyclist who recently won the French time trials and is competing in her 7th Olympics surely deserves a hurray or two. -- Chicago Tribune