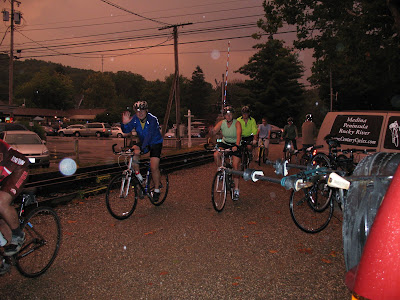 With a storm rolling through the area last evening, a smaller-than-normal crowd showed up for last night's Century Cycles Night Ride. About thirty hearty souls braved the rain to head out on the Towpath Trail, led by our intrepid CC staffer, Doug. (Above pic shows their departure from the store parking lot. Nice color of those stormy skies, no?) Those of us who got soaked on the rainy Night Ride earlier this month -- and had still-vivid memories of hours spent cleaning muddy bikes -- skipped the ride and headed straight to the Winking Lizard for a pint.

Mark your calendars and pray for sunny skies: The next Century Cycles Night Ride on the Towpath Trail is Saturday, September 20, and the last one of 2008 is Saturday, October 11.
Posted by Tracey at 11:10 AM