The annual Pancake Breakfast at the Stanford Hostel in Peninsula is something that many cyclists look forward to; there are usually more bikes than cars parked there. I had attended every year since 2005. Last year, those in our group left a little disenchanted; it took a really long time to get our orders, and then they only begrudgingly gave us seconds, and only after waiting interminably long again. In the interest of "if you can't say anything nice, don't say anything at all," I had planned to just practice my own quiet boycott of the event this year, and leave it at that. 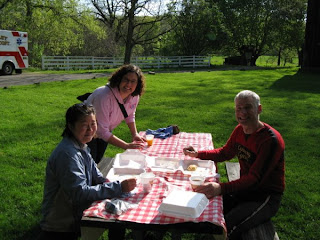 But, some friends had planned a ride to the breakfast, and a few of them had not done it before, so I was convinced to join them yesterday. I am glad I gave them another chance. The service this year was super-fast, the pancakes were hot and tasty, and the coffee, provided by Phoenix Coffee Company, was also hot and plentiful. Somebody came around with a fresh pot of coffee for refills on a regular basis, and joy of joys, there was also somebody making the rounds with a fresh stack of pancakes so that any and all hungry cyclists (and non-cyclists) got their fill.

A big thanks to the folks at Stanford for providing a fine meal and fun event. I'll be back next year! 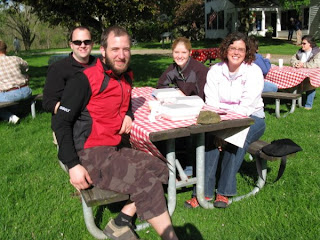