Earlier this week, Gary was telling me about a tree in his neighborhood; a pine tree that had lilac vines growing throughout it, making a usually green pine tree look all purple. Not that I'm much of a tree buff, but I figured that's as good an excuse as any to pick a random destination for a bike ride on my day off. 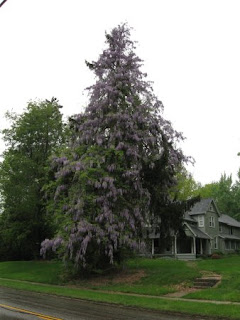 So, on Wednesday morning, I headed off in search of the Mythical Purple Pine Tree. I made a pitstop in Hudson to meet Brent for PCP (pancake power) at the Perkins, then continued on. The day turned a bit soggy as I reached Mantua Township, and I dodged semi trucks and such for six miles on Rt 82, until finally, at mile 24.6, I reached the tree, pictured here for your enjoyment.

I turned south from Hiram and headed down Rt 700 towards Ravenna. Along the way, I passed this farm, and heard such a commotion from the field that I had to stop and check it out. There was a pig; I know it's not that big a deal to see a pig here in this agricultural state, but this particular pig seemed to be pretty excited about something. He was running in circles, and oinking like crazy, acting so...pig-like! 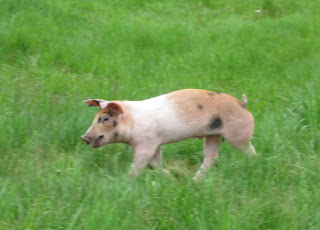 As I made my way down through Ravenna, then back home via Hudson, the rain alternated between a light drizzle and barely spitting. Since I had my good rain jacket on, I was comfortable. Sometimes, I almost prefer days like this compared to 95 degrees with the sun beating down!
Posted by Kevin at 11:43 AM