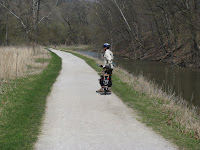 Brent and I decided to enjoy yesterday's agreeable weather by taking a ride to explore the upper reaches of the Towpath Trail, he on his Big Dummy, and I on my old mountain bike equipped with the Xtracycle longtail extension, which I have dubbed the "Big Smarty." We headed north from Peninsula; due to the I-271 construction, the Towpath was closed just south of Boston Mills Road, so we had to start out by heading up through downtown Peninsula, then north on Riverview Road. We had to make another detour on the road where the Towpath was closed again for re-surfacing between Highland Road (near Brandywine Ski Resort) and the Station Road Bridge in Brecksville. 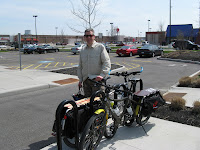 Once we reached the end of the Towpath at Harvard Road, we found that it's a much shorter hop, skip, and jump than we thought to get to Steelyard Commons. All you have to do is turn left onto Harvard Road, then make the next right onto Jennings Road, which leads directly into the shopping plaza. Both roads are a bit rough due to heavy industrial traffic, and there is a one-lane bridge under construction Harvard Road (with traffic flow alternated with a traffic light). Most of Jennings Road has a wide shoulder that serves as a de facto bike lane, but watch out for a lot of broken glass.

The new, paved section of Towpath runs in two spurs through Steelyard Commons. One section continues along Jennings Road through the middle of the plaza (where we stopped for a Starbuck's); another spur runs along the eastern edge behind Home Depot. The two spurs meet up at the north end of the plaza. The trail then continues through two small tunnels under the freeway ramps, and then leads up to 14th Street on the southern end of Tremont, right by the traffic roundabout that leads to/from the Rt. 176 ramps. From there, it would be an easy commute through Tremont and into downtown Cleveland. 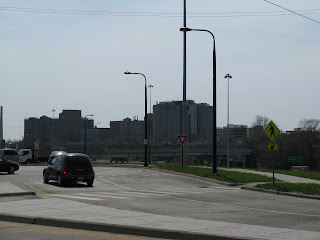 Metro Health hosptial as seen from the 14th St. roundabout. 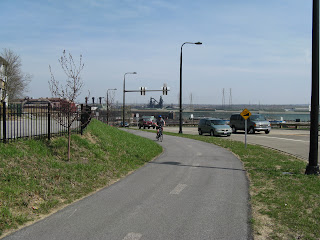 The end of the Towpath near 14th St, overlooking the steel mill and Steelyard Commons. 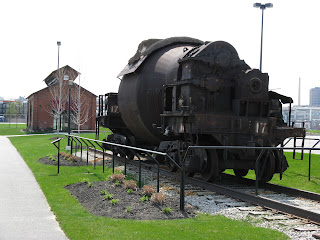 A vintage hot metal railroad car on display in Steelyard Commons. These are used to carry molten steel between different process areas in the mills, often using railroad bridges over rivers. In my former life in the steel industry, an engineer once told me that if there were a derailment or some other mishap that caused one of these to fall into the river, the resulting energy release from the tons of hot liquid steel combining with the water would be the equivalent of a small nuclear blast. 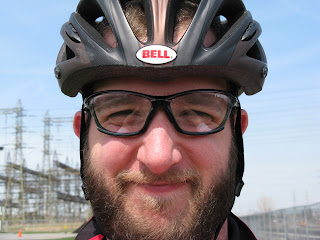 Thanks for Brent for all of these photos, including this self-portrait. 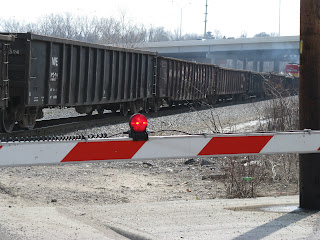