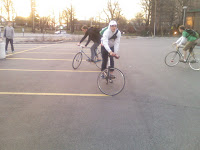 We heard from the organizer, our friend Taylor Kruse, that the first annual Rubber City Alley Cat Race on April 5 was a huge success. A couple of us from the shop had considered entering the race, but it didn't work out with our busy schedules, but Brent and I took a ride down there after closing up shop that evening. Taylor said there were about 40 entrants, mostly from the Akron, Kent, and Cleveland area, although about a half-dozen made the trek up from Columbus. 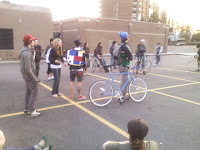 Brent and I made the 11-mile ride down from Peninsula to find the group just finishing up the track-stand competition in the parking lot behind the Chipotle on West Market St. We couldn't miss Taylor's huge, bright messenger bag acting like a beacon as we rounded the corner. As the competition concluded, we all headed across the street to the Matinee for the after-party 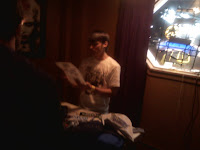 Taylor kicked things off by announcing all of the winners and passing out the prizes provided by Century Cycles and all of the other great sponsors. We enjoyed the music of Birds & Elephants and Social Insecurity. We also enjoyed (maybe too many) of the $2 special PBR pounders, which made for a fun ride back to Peninsula... 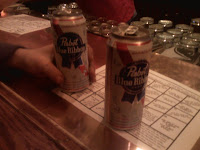