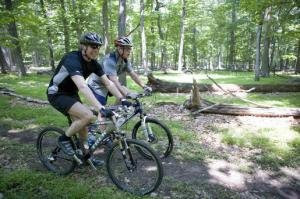 Seems the U.S. president isn't the only world leader who enjoys cycling. Danish prime minister Anders Fogh Rasmussen joined George W. Bush for a mountain-bike ride on his Texas ranch in early March and didn't even break a sweat, according to the prez. Rasmussen, who had been discussing NATO commitments to Afghanistan, climate change and Iraq with Bush, demurred, "You made me work very hard out htere on the terrific mountain bike trails on your wonderful ranch," the Danish leader said, adding that he considered cycling symbolic "of the close and strong ties between the United States and Denmark." (Source: Bicycle Retailer and Industry News, 04/01/08)

Other news we saw this week....