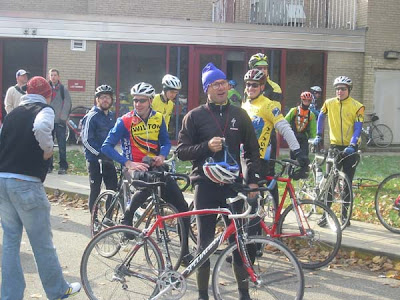 This past Saturday, I had the pleasure (or the misfortune, depending on your point of view) of participating in the Dirty Dozen, a bicycle stage race over the 13 steepest hills in Pittsburgh, PA. The course is a total of 50 miles, but during the sections between the hills, the racers ride together in a neutral pack, waiting for the official whistle to indicate the start of the next hill. Points are awarded to the top 10 riders up each hill, with the overall winner being the one with the most points at the end.

The ride is organized by Danny Chew, a local cycling legend and two-time winner of the Race Across America (RAAM). Danny is an obsessive stats-keeper, and his goal is to ride 1 million miles in his lifetime, which he expects to reach around age 70. During this ride, he reached his 1 millionth kilometer. His web site contains information about the history of the Dirty Dozen, the route, past winners, etc.
Most people, including myself, aren't there with any hope of being competitive; it's just a fun challenge to show up and try to finished the whole ride. I did it once before in 2005; I think this was a classic case of selective memory. Looking back, I must have thought, "Well, I finished once before, so it must not have been that hard." This time, around hill 6 or 7, I started thinking "Why am I here? How much more of this can I take?" But, between the hills, I'd cool off, have a snack, drink some Gatorade, and figure that I'd see how I felt after the next hill. Eventually, we arrived at the end. During the final climb, I started to feel the twinge of the beginning of a cramp in my left thigh, a problem I don't typically have. Luckily, it didn't get to the point where I was immobilized, and I made it to the top.
One of the highlights of the day is riding through the mile-long Liberty Tunnel, which takes you from the hills south of the city into the downtown area. This feat would probably get you arrested on any other day of the year. 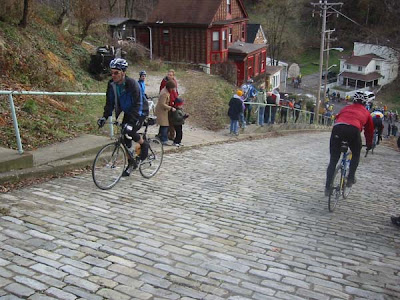 Another highlight, especially for local spectators, is Canton Avenue in the Beechview neighborhood, which is believed to the steepest street in the world, with a 37% grade. If that's not enough, consider that it's also over cobblestones.

You can see more pictures at: http://picasaweb.google.com/kevlarbikes/DirtyDozen2007
We have our own version of the Dirty Dozen here in the Cuyahoga Valley. The route is available in the "Places to Ride" section on our web site, and is known as the "Death Ride."
Posted by Kevin at 11:19 AM